I Can’t Stop It! Tics and Twitches in Children and Teens - Calm Kid Central

I Can’t Stop It! Tics and Twitches in Children and Teens

12 year old Tyler* and his mum came to visit us concerned about something they called his “twitch”.   To show me what they were talking about, they bought along an iphone video of Tyler playing his xbox while this twitch was happening.  Basically Tyler’s “twitch” consisted of him tightening up one half of his face in a tight wink while swallowing hard at the same time.  This had been increasingly happening to Tyler for several months.  Now it would happen for hours at a time while playing his game, and also at times of stress at school.  Tyler felt embarrassed about it, and his Mum felt worried for him – their GP had recommended they come and see us.

As you probably know, Tyler’s “twitch” is usually called a “tic”.  Tics are defined in the DSMV as a “sudden, rapid, recurrent, nonrhythmic motor movement or vocalization.”  Tics can be simple – involving just one movement/noise – or complex – which are movements or vocalisations which involve a range of actions/noises.

Some examples of simple movement tics in children and teens are:

Some examples of simple vocal tics in children and teens are:

Some examples of complex movement tics in children and teens are:

Some examples of complex vocal tics in children and teens are:

If you’ve worked with children /teens with anxiety you’ll have come across many with compulsions – and might wonder what the difference is between tics and compulsions.  A rule of thumb is that compulsions tend to be more complex behaviours – eg lining things up, checking locks, tapping several times in certain places. In addition compulsions are usually done more deliberately and consciously – usually in the context of a child or teen trying to get rid of a certain thought or image (ie their obsessions).  However the truth is that tics and compulsions are sometimes related, and some people believe them just to be the same spectrum of behaviours.

Tyler and his Mum talked to me about when his tic happened most commonly.  As well as while playing xbox, it also happened when he was watching youtube, when he was stressed about a test at school and when he was frustrated or when he was really excited about something.

Here are some other important facts I tell children and their families about tics.

Most children with persistent tic disorder or Tourette’s have at least one other diagnosis – most commonly ADHD, OCD and anxiety.

What should we do about tics if parents/carers ask us about them?

Some useful questions to ask parents/children if they are concerned about a tic are as follows:

I go on to talk with parents of kids/teens about these four concepts:

First, it’s important to understand that children and teens have little longer term control over the tic.  They can often suppress it for a moment.  However, they (especially older children) will often very strong urges to “do” the tic.   If they continue to try hard to stop the tic, sometimes this makes them more stressed – which often makes the tic worse.

It’s therefore important to approach the tic as something which “happens to” the child or teen – rather than something they do on purpose.  This means not getting angry at the child or teen or lecturing them about it.  Instead, if a parent and child/teen/siblings can come together as a team in coping with the tic, then often the outcomes are much better.  I also will usually talk with teachers/staff at the child’s school to help them understand the tic, and to assist them in helping other children know about the tic so they don’t tease/exclude etc.

Second, some kids and teens response really well to learning “calm down” strategies for managing negative emotions such as stress, frustration or worry.  This is where we can talk with parents about brainstorm with and write down options for the young person so they have some ideas about what they can do when they are feeling overwhelmed.  Options might include learning to relax their body, slow their breathing, relax their muscles, use calm sentences, asking for help, finding “busy” activities to distract themselves with.

Third, it can be helpful to assist the child or teen simply become aware of their tic more often.  Sometimes just helping young people notice when their tic occurs can help them reduce it happening as frequently.  However, it’s really important to try not to let this process of helping the young person notice the tic make the child/teen stressed or upset.  This can be tough, as often kids/teens DO get quite – understandably – upset when the tic is pointed out.  For some children/teens we’ve come up with a neutral “code” that mum/dad can use to let them know the tics are happening – eg like a touch on the child/teens’ shoulder or getting their attention and the mum/dad touching their own shoulder.  Some older kids/teens have found it works well to take charge of noticing the tic themselves – for instance have spent a week recording their tics – and the things that trigger their tics – on their phones for a week or so.

Fourth, I sometimes will use a more comprehensive approach where we use all of the above plus a habit reversal approach.  The combination of all these areas above is sometimes called Comprehensive Behavioural Intervention for Tics – CBIT .  A  2010 study found 52% of children who received CBIT showed significant symptom improvement compared to 18.5% receiving the control treatment over 6 months.  As an overview, the habit reversal approach involves helping the child or teen use a different, less obvious movement or sound to replace their tic.  This is the idea that instead of tic-ing, the child/teen will replace the tic with something similar to help relieve their stress – but something which causes less problems and is less noticeable.  For example, the child/teen might “click” their tongue at the top of their mouth instead of putting their tongue outside their mouth, might squeeze their fingers together instead of touching their nose or might sigh softly instead of making a grunting noise.

Again, it is important to try to make sure habit replacement behaviours don’t become a source of high stress which might then exacerbate the situation.  Sometimes I’ve talked about this approach being “catch what you can” with families.  This approach seems to reduce the pressure of having to do this every time.

Tyler and his Mum had a few sessions with me to do stress reduction strategies and habit reversal treatment.  Although his tic didn’t go entirely, it reduced significantly and the last time I saw him he was feeling much more relaxed about it.

I hope this gives an overview of this area.  I have developed a brief one page worksheet for children to help them being to understand, monitor their tics for our Calm Kid Central members (professionals who work with children).  If you are interested in this worksheet, please click below to find out about Calm Kid Central professional membership.

I’ve also written a parent/caregiver article on tics which you are welcome to read and freely distribute – for the link to this article, click below. 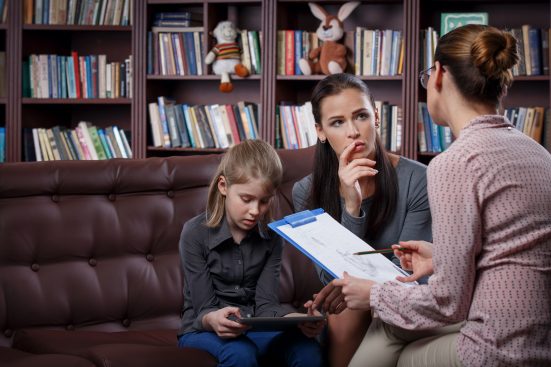