Helping Kids Get Along With Others As professionals working with kids we know that children learn a great deal from “playing” with each other.   They learn to interact socially, learn about their environment and how the world works.  It is important for children to have unstructured time to play together without adults directing the action.

Unfortunately we also know that there are some children who often struggle with this unstructured play.  Arguments and fights develop quickly and get out of hand.  Some children find it really difficult to resolve problems among themselves.

In my experience, these children really benefit from us supporting them with these skills.  Here are some of the ways I work with children in this area.

Given the importance of game playing skills, when I’m working with kids I routinely ask about their recess/lunch/after school play with their siblings and friends.  For example here are some questions which might be useful to ask children (either in a classroom situation, written “playtime quiz” or when working with children one on one:

Once we are aware of how kids are going with their game playing, we can then look at the kind of skill development needed.

Before working on an area with a child, I attempt to see if I can get their permission.  For example, I might say:

“Could we do some brainstorming together to make playing games more fun?”

I then ask children to think about specific games they play rather than “playing” in general.   If parents are working with me – I’ll ask parents to help identify games they know the child/their siblings play together.

Tell me about what you might do with Jack today?
What might you play?
What do you think might be some fair rules when you are playing that game?

I ask children to think about rules for the beginning, middle and end of games.  I also talk about how it’s important to try to agree on the rules of a game before you start the game.

It’s also often effective to ask children to develop problem solving strategies about problems which have happened before in game play – and ask them to generate potential solutions in advance of them happening again.

Some children of course have trouble thinking about the problems that have come up or might come up – due to cognitive limitations/developmental stage, in which case further prompting might be required, for example:

When thinking about what NOT to say, I talk with children about avoiding using the word “cheater”.  For example, I say:

What happens if someone calls you a Cheater?  What could you say instead if there is a problem?

If children have trouble thinking about this, I help them out by asking them about these ideas:

If kids feel frustrated in a game they say: “I need a five minute time out” and they do something else for a minute.

4. Helping children generate kind sentences to use in games

I also have found that teaching children the specific words to say when being kind and fair in a game is more effective than just talking more generally about “being kind and fair”.  This means coming up with “kind game playing sentences” for each game.  For example:

If children can’t think of kind game playing sentences you could make some suggestions, and ask children what they think about them.  For example:

Sometimes it can be helpful for children to make their own “kind game playing sentences” poster.  If I’m working one on one with a child, I’ll ask them to bring it back the following session and we can talk about how many sentences they were able to use since the last time, and what happened when they used them.

Although “talking about” game playing is useful, it is also really valuable to do in-vivo coaching of children while they are playing.  If I’m doing this in a counselling session, I will ask parents/children to play together while I watch, or ask siblings to play together while I watch.  If I’m in a classroom/play ground setting, it’s easy as we can use the naturalistic play that occurs and just make sure we are spending short amounts of time coaching/watching.

I then do the following while I’m watching play activities:

1. Prompt children while they are playing, to use a particular good game playing sentence/behaviour (“can you remember some kind sentences to say”, “now’s the time to say “let’s take a break”, say it softly please, “remember what do you do BEFORE you start the game”, “let’s pretend someone breaks a rule – what will you do?”)

2. Notice their good play (“wow, great kind sentence”, “nice work on using a calm voice, I’m so impressed”, “You’re such a good sport to remember to say congratulations”, “hey you guys solved that problem so maturely all on your own”).

Let them sort it out themselves?

While it’s tempting to let children sort out their game-time conflict themselves, the reality is that some children just need our help with it.  In addition, spending at least some session or class time on this can save many hours of time in dealing with problems that arise, and can make a significant difference to children’s quality of life. 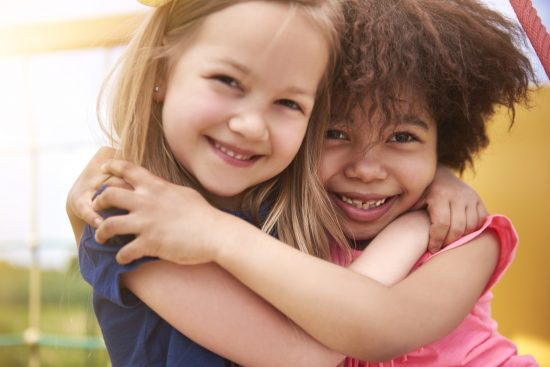 When, Why and How to Help Children Use Appropriate Eye Contact – What Does the Research Say?